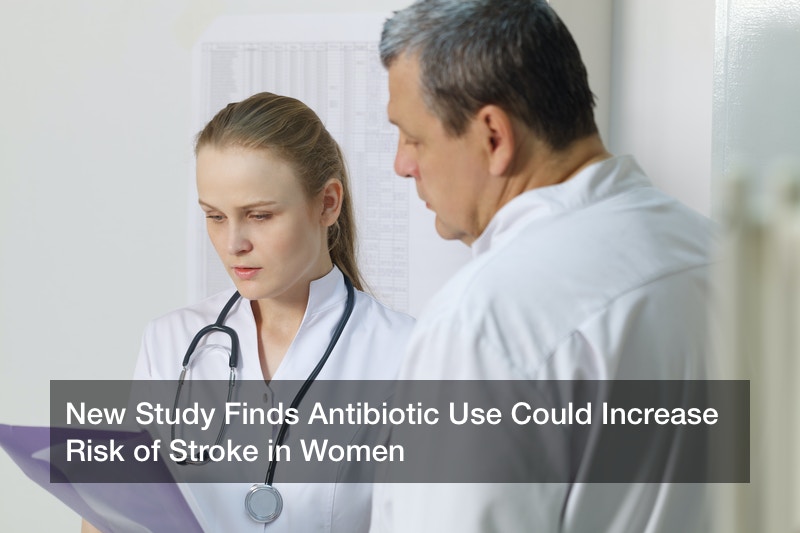 Just in time for Stroke Awareness Month, researchers have discovered that antibiotics could raise the risk for stroke and heart attack in women, according to recent studies.

While many people believe that strokes only happen in older people suffering from a myriad of health conditions, just about anyone can suffer from a stroke at any time in their lives. Over 80% of stroke cases are ischemic, meaning that they occur because of a blood clot blocking the flow of blood to the brain.

However, this new study found that women who take antibiotics for extended periods of time while in their 60s or older may be more likely to experience a stroke.

Researchers think that antibiotic use in older women makes them more susceptible to stroke because this extended antibiotic use may alter the flora and bacteria in your gut. Because these antibiotics can change the microenvironment of your stomach, this can lead to cardiovascular disease and increase the risk of stroke, a condition which is directly impacted by heart health and blood circulation.

“By investigating the duration of antibiotic use in various stages of adulthood we have found an association between long-term use in middle age and later life and an increased risk of stroke and heart disease during the following eight years,” notes lead researcher Dr. Yoriko Heianza.

“As these women grew older they were more likely to need more antibiotics, and sometimes for longer periods of time, which suggests a cumulative effect may be the reason for the stronger link in older age between antibiotic use and cardiovascular disease,” he concludes.

Antibiotic use often increases for older people who are more likely to suffer from deleterious health issues, including respiratory infections and UTIs. Though prescribing these antibiotics does not fall into the category for medical malpractice, where more than 20,000 claims are filed each year, this study could result in changes to antibiotic prescriptions and aftercare services.

So far, there isn’t direct causation between antibiotic usage and stroke. However, the fact that there may be a link is cause enough for further study.

In the meantime, other organizations and researchers are taking advantage of Stroke Awareness Month to raise awareness for stroke wherever they can.

There was even a recent live Twitter event where multiple stroke research organizations answered questions posed by Twitter users in real time.

The event was held on May 2, consisting of the NINDS, Million Hearts, American Academy of Neurology (AAN), and the American Stroke Association. Under the hashtag BrainforLife, leaders in the medical field were able to answer questions, raise awareness, share infographics, and offer helpful tips to prevent stroke in the future, one of which is high blood pressure. This medical issue is often exacerbated by complications in weight. It’s estimated that more than 34% of Americans are overweight, putting many people at a higher risk for stroke.

It’s not uncommon for a stroke victim to not know what’s happening when a stroke occurs. These attacks come suddenly and it’s important for friends and family to act quickly during a stroke episode. Doctors recommend looking for the most common signs of a stroke, including:

A stroke victim might suffer from one or all of these symptoms. It’s vital that you get your loved one to an urgent care center if they start to exhibit these signs of a stroke. Luckily, there are more than 7,357 urgent care facilities present throughout the United States.

Doctors also recommend that you follow the BE-FAST method, which stands for balance, eyes, face, arm, speech, and time: after all, you want to act on these symptoms quickly! Timing is everything when it comes to treating a stroke victim.

But what are the best ways to prevent a stroke from happening in the first place?

Cardiologists and doctors recommend that the best thing you can do is get your blood pressure monitored often, especially if you’re in an age bracket or stressful job that makes you susceptible to higher blood pressure. Though 86% of companies who use employee recognition programs cited higher levels of happiness, it’s a combination of efforts that can help improve the health of your employees. Try to partner with local gyms and healthy restaurants to offer your employees discounts.

Doctors also recommend diet changes to fuel heart health. A growing child may need 1,300 mg of calcium each day, but heart-healthy adults need just as much. You should also begin ingesting darker, leafy greens and limiting your sodium intake.

Getting exercise is just as important, according to cardiologists. Sitting for eight hours each day means that you’re likely not getting the exercise you need. Get up and get moving whenever possible.

May is Stroke Awareness Month and there’s no better time to get your blood pressure checked than now. It’s never too early to start making healthy changes and performing your own research on this common condition.